Compound is a decentralized lending application that was built on the Ethereum blockchain which connects lenders and borrowers, allowing for anyone holding a supporting cryptocurrency to deposit into a Compound smart contract, where it joins a liquidity pool and begins generating interest on another cryptocurrency, COMP, which users earn as an incentive.

The difference with Compound’s platform is that the generated interest comes from other users that borrow funds and pay that interest for the loans. Unlike traditional financial institutions, once the funds are withdrawn, they immediately stop earning interest.

Compound first entered the space in 2017, which was immediately backed by Coinbase Pro, one of the earliest projects to receive funding from Coinbase Ventures. The funding came from an $8 million seed round with the support of Andreessen Horowitz, Polychain Capital and Bain Capital Ventures also participated.

Coinbase Custody and Anchorage also support COMP and its cTokens, which other exchanges, including Cryptoexchange.ae, Binance, FTX, and Poloniex have jumped on.

Compound first launched its governance token, COMP on June 16, 2020. To incentivize the borrowing and lending behavior on Compound, it uses another native cryptocurrency it calls COMP to reward users each time they interact with a Compound market by borrowing, withdrawing, or repaying the asset.

Unique to its launch, it only took one day of trading for COMP to lead in the DeFi rankings, according to a CoinTelegraph report. Compound’s COMP was the start of the DeFi boom, which was monumental to DeFi enthusiasts as they watched the DeFi favorite, Maker (MKR) be dethroned.

As of June, COMP leads the DeFi rankings, despite its previous volatility of falling below $250 and eventually jumping 25% after it was listed on Binance.

As of 2020, over $500 million in assets were locked in the Compound protocol.

The vision of having truly decentralized governance is carried out through delegation. Through Compound, users can delegate their voting rights to an Ethereum address of their choice (a DeFi startup, VC fund, or another prominent crypto user in the space).

Like traditional democracies, users are given the option to delegate a candidate that they believe falls in alignment with their values. Addresses that have received delegations representing more than 1% of COMP’s supply can propose governance actions. In other words, not just anyone can just suggest changes. This helps prevent addresses with a little economic stake (or vision) in the network from proposing potentially risky, dangerous, or otherwise harmful actions at the expense of truly passionate users.

These “governance actions” become part of executable code that is eventually integrated into Compound once a majority vote is reached. 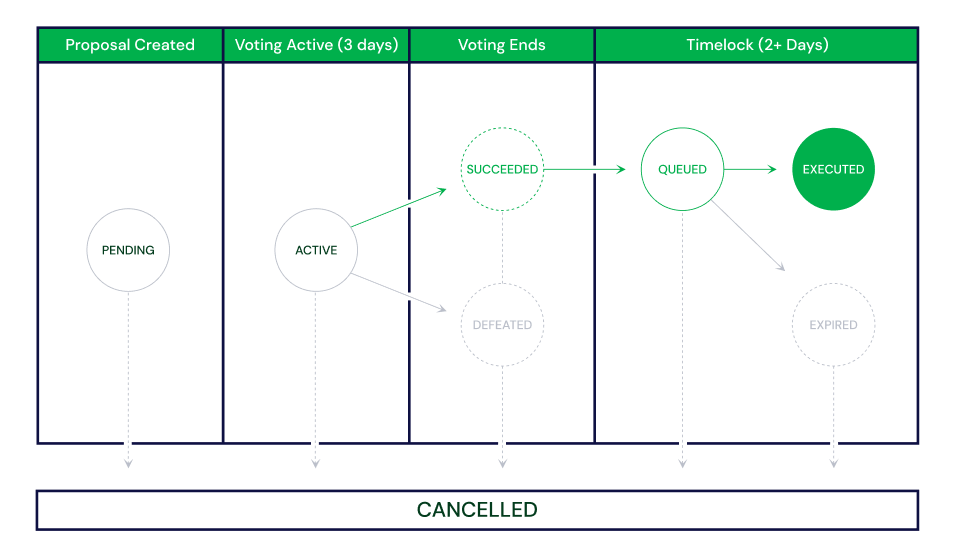 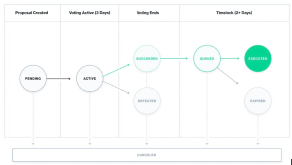 Once a proposal has been suggested, COMP holders then vote on it over a three-day period. If a proposal receives at least 400,000 votes (out of 10 million total potential votes once all COMP is distributed), and a majority of votes are “for” it, that governance action becomes queued in a two-day timelock, which is then activated.

The timelock allows users of the protocol to prepare for that change.

In case you’re wondering why ‘governance tokens’ are instrumental here, remember that DeFi is about recognizing voting rights over matters like protocol upgrades or including new assets for borrowing and lending. This idea has continued to attract high-profile support.

Many believe the hype behind COMP to be attributed to a “new type of share equity”, which CoinTelegraph shared in an interview with Vadim Koleoshkin, the chief operations officer at Zerion, a DeFi interface provider.

Once funds are deposited into Compound, native tokens, called cTokens are issued in an equivalent value of ETH. Thus, a holder will receive cETH, which can then be used as collateral for a loan and spent while also earning interest.

COMP’s current popularity is highly attributable to “yield-farming”, which leverages the issuance of COMP to ethereum users in a day, enticing users to change their behavior in how they use the Compount protocol to then maximize COMP.

Specifically, Compound allows the issuance of 2,880 units of very expensive cryptocurrency each day to ethereum users to help entice changed protocol behavior. This “yield farming” can occur by leveraging crypto and/or providing liquidity.

But of course, there are certain risks that yield-farming presents, which could threaten some or all of the user’s funds: smart contract vulnerabilities in the lending protocol, vulnerabilities in the actual cryptocurrencies being used, liquidation from taking too much leverage as market changes, protocol design failure, and/or user error.

COMP’s launch helped accelerate DeFi’s growth by 50% in a single week, followed by a $1 billion valuation just a week after.

While it’s very likely other protocols will follow suit, what Compound has done is proof that launching a governance token with a proper incentive structure, like COMP, could help lead to a mass adoption of DeFi.

At the beginning of October 2020, MetaMask, a popular Ethereum wallet, hit one-million active monthly users, attributable to the tremendous growth the DeFi ecosystem has seen. Its users grew exponentially around the same time Compound launched COMP.