What is EOS Blockchain?

Launched in June 2018 by Block. One and Dan Larimer, the EOS blockchain became at one-time, the world’s seventh-largest blockchain by market cap. Larimer is also the founder and creator of established platforms like Bitshares and Steem.

In a 2017 whitepaper, Block.One introduced the EOSIO platform, which was released as an open-source software in June the following year.

In short, EOS is a blockchain-based, decentralized ecosystem that allows for the development, hosting, and execution of commercial-scale dApps on its platform.

While there are other blockchain-based networks like Ethereum, which facilitate DApps, EOS specifically concentrates on the critical pain-points of blockchain, addressing the issues of speed, scalability, and flexibility.

There is no “universal” definition that can fully summarize EOS, but there are important characteristics that help shape its purpose and utilization. From the developer’s perspective, it wasn’t necessary (and still isn’t) to formalize such a definition.

EOS had a bit of a rocky start in the industry, as it was heavily criticized because of its highly-controversial consensus model, DPoS. Under a “Delegated Proof-of-Stake” algorithm, the number of nodes participating in consensus would be decreased, creating higher throughput. More on this later.

Let’s modernize this a bit.

Think about how Facebook, Instagram, and Twitter operate with respect to users “liking” a post. More than 52,000 Facebook “likes” happen per second, and each one of those “likes” is an individual transaction you as the user never see (nor care to see).

Then you have the financial industry, which must process more than 100,000 transactions per second (again, not that you care to see; you just want the funds transferred to its destination).

Point being is, speed and efficiency are necessary for ecosystems like Facebook and the financial sector to thrive, succeed, and be considered “stable”.

With Larimer running the show, applying similar mechanisms as Steem and Bitshare do, whereby each processes around 100,000 transactions per second and use smart contract technology, becomes a major focus for any and all usability issues EOS looks to solve.

Which brings us into the architecture of the EOS ecosystem, or as its commonly referred to as the “Ethereum Killer”. Ethereum processes approximately 15 transactions/second.

The EOS ecosystem is made up of EOS.IO and EOS tokens. Let’s explore both.

Think of EOS.IO as a computer operating system (OS), like Microsoft Windows or Apple’s MAC OS. Here, EOS.IO manages and controls the EOS blockchain network. Its blockchain architecture is designed to enable vertical and horizontal scaling of dApps.

The EOS token is the native cryptocurrency of the EOS network. Unique to the network, a developer-only needs to maintain dominion and control over the EOS coins, rather than spending them, to be eligible to participate in network resources and to build/run dApps.

Before going into the controversy surrounding DPoS, let’s explore what DPoS is.

The overarching goal for all 200 witnesses is to keep the network secure, and in exchange, are rewarded. In addition to the 200 witnesses, there are many backup witnesses who all wait their turn to help secure the blockchain, so they too can be rewarded.

In the event a witness doesn’t do their job correctly (or at all), they can be voted to be kicked off the network, leaving room for a backup witness to come in.

What makes EOS’ network different than the rest, is rather than “renting” computer power, like Ethereum, EOS token holders actually own the network.

EOS Tribe, as BP which participated in the launch of EOS’ first chain, announced on Steemit in September, that it was stepping away from EOS as a BP, wanting to focus on other blockchains and how EOSIO could be otherwise implemented.

On its departure, EOS’ Eugene Luzgin warned users that it was staying true to its principles, never wanting to participate in “the game of vote trading”. Luzgin’s departure is attributed to the conduct of EOS whales, who made it almost impossible to earn funds for maintaining the chain, without their financial support. The problem was that those whales lent overwhelming amounts of support to BPs in China--and the problem was that there could only ever be a total of 21 BPs, at any time who establish consensus on the chain.

Consequently, this created widespread concern among participants in the EOS community, due to a very real threat of censorship-resistance, which CoinDesk investigated in-depth.

With Larimer running the show, applying similar mechanisms as Steem and Bitshare do, whereby each processes around 100,000 transactions per second and use smart contract technology, becomes a major focus for any and all usability issues EOS looks to solve.

Which brings us into the architecture of the EOS ecosystem, or as its commonly referred to as the “Ethereum Killer”. Ethereum processes approximately 15 transactions/second. The EOS ecosystem does not implement any mining concept, instead using block producers (BPs) who generate the required number of blocks in exchange for the creation of new EOS tokens for every new block they produce. Think of BPs as the “DJs” to a radio station, as Larimer once described.

These BPs can move in and out of the top 21 nodes at any time, which have all the power over the chain.

To their advantage, BPs have the flexibility to publish their desired income by posting a figure, which is then taken by the system and calculates a certain number of tokens based on the median value of that expected pay figure published by all BPs.

Now you’re probably thinking that BPs will probably drive up the desired pay figure, an EOS feature that can be easily abused. Therefore, developers have inserted a mechanism into EOS to “cap” BP awards, so that the total annual hike in token supply cannot go beyond 5%. Token holders, who in fact vote on matters like “pay figures”, also have the authority to vote out BPs who demand more inflation (or attempt to misuse the system).

EOS New York was one of the original 21 BPs at the chain’s launch.

On October 15, 2020, it was announced that the Associated Press (AP) and Everipedia will put the 2020 U.S. Presidential Election vote counts on the EOS blockchain, serving as a groundbreaking and landmark milestone for both the political and blockchain realms. 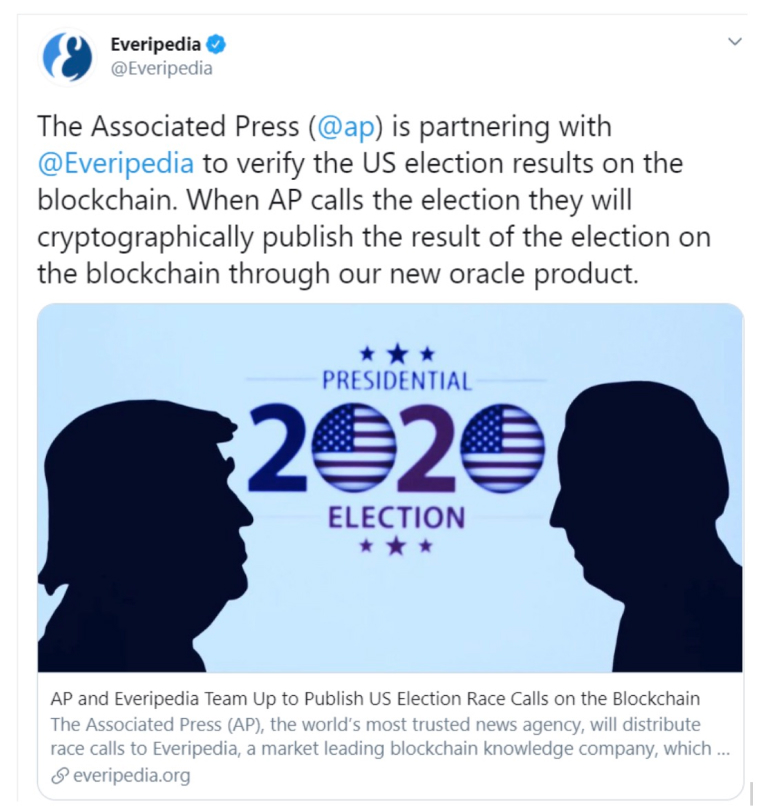 The AP, a news agency that counts votes and declares winners for more than 7,000 election races, is for the first-time delegating and partnering with Everipedia, publishing vote counts to Everipedia’s Chainlink-based oracle service to ensure voter data is handled accurately--a major issue plaguing the U.S. for many years dating back to the 2004 George W. Bush-Al Gore election.

The AP has made clear that it will still count votes itself, as it has always done, but Everipedia will merely access the data via the news organization’s API, publishing that data to the EOS blockchain. That data, according to Everipedia, can be used in prediction markets, allowing users to bet on election results.

Everipedia has also clarified that it will not publish all data about the election, as vote-counting is just one stop of the election process, necessitating a minimal use for blockchain technology.